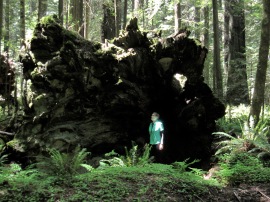 The Avenue of the Giants winds its way through 31 miles of majestic redwood forest, showcasing ancient trees of such grandeur that they almost defy description.

On a trip back to this land of my birth I joined the tourists, gawking in wonder at the immensity of these giants; many reaching so high into the sky that you can barely see the top; others lying fallen, stretching hundreds of feet across the ground. Yet even in death they remain magnificent; covered with moss and ferns, their decaying matter nourishing the earth, providing a safe haven for new seedlings or homes for small creatures, and boasting upturned root systems so huge that one feels miniscule in comparison.   Yet even these giants are microscopic compared to the One who created them.

Who has measured the waters in the hollow of his hand and marked off the heavens with a span, enclosed the dust of the earth in a measure and weighed the mountains in scales and the hills in a balance?   Who has measuredthe Spirit of the Lord, or what man shows him his counsel?   Whom did he consult, and who made him understand?  Who taught him the path of justice, and taught him knowledge, and showed him the way of understanding?  Behold, the nations are like a drop from a bucket, and are accounted as the dust on the scales; behold, he takes up the coastlands like fine dust.  Lebanon would not suffice for fuel, nor are its beasts enough for a burnt offering.  All the nations are as nothing before him, they are accounted by him as less than nothing and emptiness.  Isaiah 40:12-17

Truly, truly, I say to you, unless a grain of wheat falls into the earth and dies, it remains alone; but if it dies, it bears much fruit. John 12:24

For his invisible attributes, namely, his eternal power and divine nature, have been clearly perceived, ever since the creation of the world,in the things that have been made. So they are without excuse. Romans 1:20