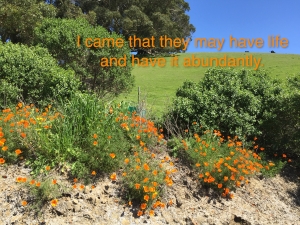 Spring has sprung in California, bringing evidence of new life everywhere. It officially arrived on Palm Sunday, with trees and flowers are beginning to bloom, and even a few spring showers in our drought-stricken state. A week later, on Easter, we celebrated the resurrection of Jesus, the most amazing example of life that exists.

The weekend following Easter, we were visiting our son’s family, enjoying the rare opportunity to spend time with our three (forgive me for gushing) adorable, cuter-than-cute, smart, talented grandchildren. Our identical three-year-old twin grand daughters love books, and reading to them is a sure guarantee of having both girls on my lap for extended periods of time. Book after book, from easy cardboard toddler books to a little more detailed storybooks, their attention never wavers as the already-read pile beside the chair grows and grows. Interspersed in the collection are some Bible stories, and these resulted in one of the most memorable blessings of my life; a memory that I’m certain will endure forever. Each time Jesus’ name was mentioned, Hope would exclaim, “Nana, He’s alive! Did you know He’s alive? He really is alive!” Such a joyful, excited, simple faith–no wonder Jesus loved the children so much, and no wonder we need to become as little children!

At that time the disciples came to Jesus, saying, “Who then is greatest in the kingdom of heaven?” Then Jesus called a little child to Him, set him in the midst of them, and said, “Assuredly, I say to you, unless you are converted and become as little children, you will by no means enter the kingdom of heaven. Therefore whoever humbles himself as this little child is the greatest in the kingdom of heaven. Whoever receives one little child like this in My name receives Me. “Whoever causes one of these little ones who believe in Me to sin, it would be better for him if a millstone were hung around his neck, and he were drowned in the depth of the sea. Woe to the world because of offenses! For offenses must come, but woe to that man by whom the offense comes!  Matthew 18:1-6

But when the chief priests and scribes saw the wonderful things that He did, and the children crying out in the temple and saying, “Hosanna to the Son of David!” they were indignant and said to Him, “Do You hear what these are saying?”

And Jesus said to them, “Yes. Have you never read, ‘Out of the mouth of babes and nursing infants You have perfected praise’?” Matthew 21:15-16