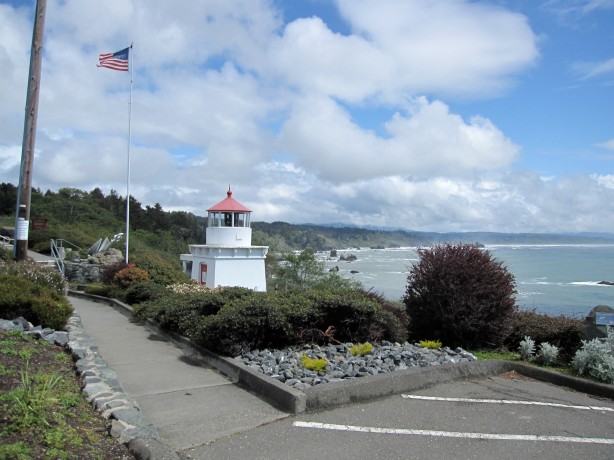 After living in the California desert for over a year I longed for a glimpse of the ocean, and the day finally arrived when I got my first look at the mighty Pacific—Southern California style.  I was surprised and disappointed beyond belief because homes, businesses and roads hugged the sand from Redondo Beach to Malibu; miles and miles of congestion with masses of people swarming the beaches.  Where was the lush vegetation?  Where were the majestic cliffs?  I felt kind of like Dorothy in the Wizard of Oz when she awoke and discovered she was certainly not in Kansas anymore.

In Northern California the coastline is magnificently green and rugged, with huge rocks around which wonderful tide pools form when the tide is out.   Long stretches of beach are almost uninhabited by people, and boats often bob around on their anchors in natural harbors instead of being confined to massive marinas such as in Newport Beach or Marina Del Rey.

The Pacific of the North Coast can be dangerous though, with violent storms and treacherous currents being the cause of many shipwrecks.  At the entrance of Humboldt Bay alone, just about every kind of vessel imaginable has gone down—from 1800’s sailing ships to fishing boats to passenger ships to Navy destroyers and submarines.   Nine historic lighthouses dot the coast from Point Reyes on the south to Crescent City on the north, all of which were built in an effort to safeguard these ocean-going vessels, warning them to navigate around hazardous spots and providing lights in the darkness.  Foghorns also abound, giving audible alerts of dangerous rocks or shoals.

Just like the Northern California coast, life itself can be a dangerous place.  We are surrounded by evil, with one stormy trial after another occurring throughout our time on earth.  Fortunately, as the lighthouses and foghorns direct ships away from harm, so do Jesus as our Light and the Holy Spirit as our teacher guide us through life; providing for our every need and warning us of the pitfalls ahead.

The people who sat in darkness have seen a great light, and upon those who sat in the region and shadow of death Light has dawned.  (Matthew 4:16)

But the Helper, the Holy Spirit, whom the Father will send in My name, He will teach you all things, and bring to your remembrance all things that I said to you.  (John14:26)

One thought on “A Light and a Voice”