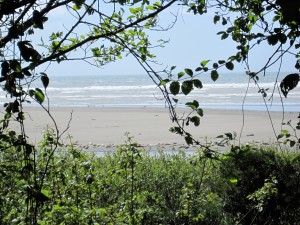 One mile north on the railroad tracks; cut left through the trees on the dirt path; climb over the sand dunes; and wade into the waves of the magnificent Pacific Ocean.  It was once a favorite pastime on long summer days for my friends and me.

I was excited to go back and show my husband that beach where we had such fun—climbing up and then rolling down the dunes, making sand castles, collecting driftwood and sea shells, looking for starfish, and playing in the water; but it was not to be.

The old path through the trees had been replaced by a paved one, now part of the beautiful coastal walkway called the Hammond Trail.  Well, that was OK; it would still get us to the beach.  Wrong, for it was soon obvious that the sand dunes were gone and the waves were clearly visible, and then—oops!!!  There was no way to reach them because the Mad River had changed its course and now ran parallel to the shoreline, totally blocking any approach.  The narrow, flat spit of sand between the river and ocean was now accessible only to hundreds of harbor seals and sea gulls.   Well, at least someone still got to play there.

The landscape had changed but the beauty of this portion of the Pacific Coast was still breath-taking, and I stared in awe at God’s creation; pondering the fact that out there under the surface of the water was an huge undersea world visible only to the creatures who live there and the God who made them.

For since the creation of the world His invisible attributes are clearly seen, being understood by the things that are made, even His eternal power and Godhead. (Romans 1:20a)

So God created great sea creatures and every living thing that moves, with which the waters abounded, according to their kind, and every winged bird according to its kind.   And God saw that it was good. Genesis 1:21

If I ascend into heaven, you are there; if I make my bed in hell, behold, you are there.  If I take the wings of the morning, and dwell in the uttermost parts of the sea, even there your hand shall lead me, and your right hand shall hold me. Psalm 138:8-10